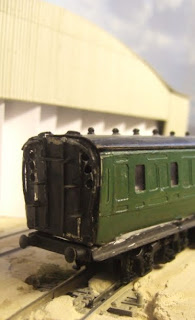 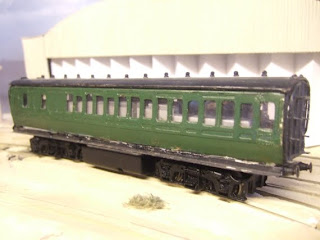 Last year I started building a railcar from a grounded carriage body I found in the bits box. I have recently found it in one of the stock boxes and wondered what I could do to improve it. At the moment, apart from the chassis it looks nothing like a railcar, and more like a motorised push-pull carriage! It has been plonked on an American diesel I bought for about £21 and runs very nicely indeed.

It is a freelance project so I welcome suggestions as to what I could do to improve it. First thoughts include an exhaust and some sort of cab windows? Some form of prototype images of various railcars would be appreciated too.

Something tells me that making alterations to the body will be difficult. It's quite solidly built with metal roof vents glued into the roof. The main assembly seems to be with metal lugs twisted, the sides seem to be glued to the ends. It would seem to be easier to start afresh, but I really like body.

One thing I can think of is blocking off some of the windows at the rear, and then refabricating both the ends? That way it requires less drastic surgery. I guess the exhaust(s) could go on the engine end. The motor really does intrude a significant amount, as you can see from the photos.
I'm open to suggestions...
Jam 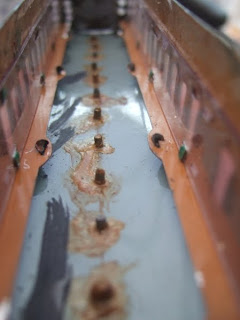